This is the# first of a two part series where I’ll attempt reflect on, and try to draw some lessons from, the running of my first 100mile Ultramarathon, the Northburn 100 (NB100). For ease of reading and organisation I’ve divided the posts into two categories: Practicalities and Philosophy and The Future. In this post, Practicalities, I’ll go over some of the lessons I learned or reinforced regarding logistics, nutrition, pacing, equipment and so on. In the next post, (to be published in Trail Run Mag), I’ll try to define some of less tangible ideas or strategies that got me through the NB100 and the shift I’m starting to recognise in myself toward more adventurous or, as John Annerino puts it, Wild Running. 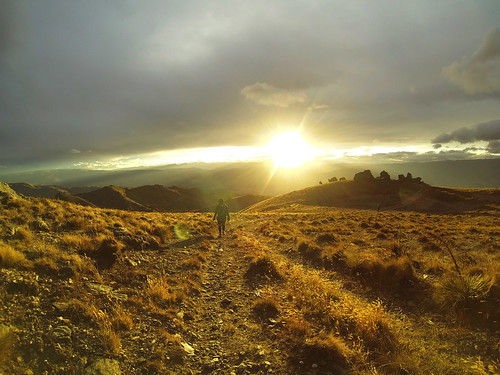 In the 11months between the 2012 WildEndurance (WE) 100km event and toeing the start line of the Northburn 100, I’d run another 11 Ultras (TNF100, GOW100, SCC100, Macedon53, Tan50, Walhalla50, HGIT50, Prom60, Razorback64, 2Bays56, Cradle80) and in the last 3 or 4 of those I’d definitely started to feel like I’d over-raced the past year. Prior to this I’d only ever done one or two (WE and/or TNF100) events per year, so I’d ramped it up somewhat. Even as recently as the Cradle Mountain Ultra in early February, my diaphragm had a nasty tendency of unfairly going into spasm during longer or harder runs, making it feel like I’d done a week of crunches or horizontal folk dancing. With that in mind, I was stoked to get the opportunity to instruct a NOLS Backpacking course (video | photos | photos) in country similar to NB100 in the month leading up to the race. This gave me a much-needed break from running while giving me some very specific, very appropriate training for the race. While I’d dramatically reduced the running volume, in the fortnight from late Feb to early March I still managed to fit in 4 or 5 runs of 2-4hrs, each including up to 1500m of elevation gain and loss. Hiking the ascents and jogging/running the descents at NB100 was comfortable and I finished the event without any serious pain in my knees, quads or legs in general. In fact, I had less pain after NB100 than after Cradle.

I attribute both of these to Matt Bixley. In other words, running 100mile Mountain run takes it out of you, try to avoid going into it already spent. Also, specificity is key: I spent the month beforehand Hiking big hills day after day in terrain similar to NB and then threw in some fat runs with massive relative elevation gains/loss. I believe this worked extremely well for me and set me up for success at NB. Long days with heavy packs adjusted the legs to bearing weight and the familiarity with NZ Terrain, vegetation and weather helped my self-belief enormously. 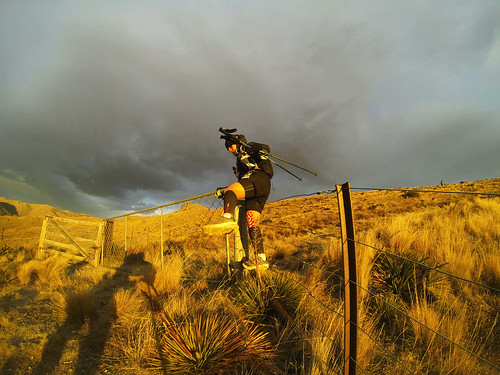 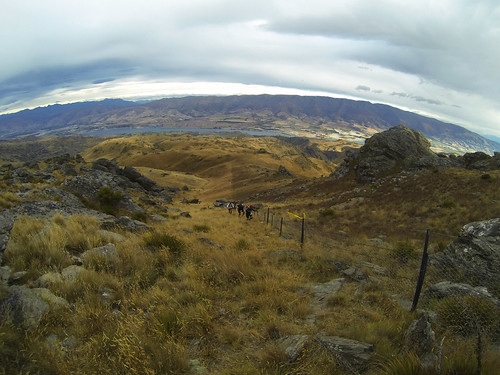 #3: Sherpa Pace: Get to the top at the same speed

When I’m instructing a backpacking course or helping novices to find an appropriate pace on hills, I introduce the idea of Sherpa Pace. Around the world, the Sherpa people (and neighbouring family groups) of the Himalayan Mountains are renowned for their stoicism and incredible strength. I’ve seen them carrying in excess of 80-100 kg of hardwood beams on their backs, connected to a strap made from a recycled grain-bag which runs across their forehead, up incredibly steep mountains, at altitude, day after day. Being paid by the Kilogram, it’s important they develop a pace that allows them to do the job efficiently and consistently. This is a Hare and Tortoise situation here people: The Sherpa get to the top of the hill at the same speed they start up it and so keep their pace consistent across the entire climb. Metabolically, I guess they’re remaining entirely within their aerobic zone and avoid fatigue by studiously avoiding their anaerobic threshold. It’s no wonder they can virtually carry people up the worlds highest peaks.

#4: Recovery begins at the Start Line

Traditionally Armies approached Warfare with a “strategy” called “Attrition”. Simply, recruit as many soldiers as possible, aim to outnumber your opponent, and throw your soldiers at each other in the hope that, at the end of the day, you have more soldiers still standing than your enemy. Modern warfare has, at least amongst developed nations, moved away from Attrition and toward “Manoeuvre” Warfare. Simply, learn as much about your enemy as possible, train your soldiers accordingly and employ an army that can out-think and, therefore, out-manoeuvre the opposition. In this approach a commander attempts to mitigate risk and reduce losses as much as possible.

In reflecting on Northburn, and distance running in general, I feel the analogy between Military strategy and Ultras is appropriate. As someone who lacks any natural talent for running (I hated running until I picked up trail running while training for a Mountaineering course in Chile in 2004), my approach is to try and out-think the race. 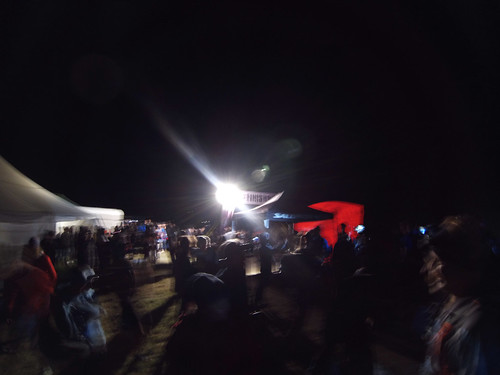 Recovery begins at the Start Line

There can be no getting on the back foot with hydration, nutrition, blisters or any other niggles. Everything matters so respond early and keep on top of it. Cold? Do something about it. The added burden of a 2nd pair of gloves, Thir band (like Buff but cooler!) or additional Gel is far outweighed by the morale, comfort or security they provide. Starting to feel a hot spot? STOP and fix it; then and there. Don’t wait 10k until the next checkpoint, or it may be your last for that race. Feeling too nauseous to run? Try and make yourself vomit or check-in to the ablutions. Use your initiative and solve problems as and when they arise.

Having trouble eating or drinking? Too bad. In the army you aren’t paid to enjoy the food – you’re paid to eat it. With Ultras, you don’t pay to enjoy your food, your entry covers the privilege of eating monotonous, but hopefully wholesome (and otherwise unthinkable), food. An army marches on its stomach – no one ever said anything about their damn tastebuds! Get it in; get it done, regardless of the context. That said, you probably need less than food you think. It’s very easy to overdo it, particularly at checkpoints. Coming into the 50km mark of NB100 I sculled a Ginger beer, two boiled potatoes, some pumpkin soup, 8squares of chocolate and a double espresso – and felt sick for the next 2 hours! Eat less, more regularly. Eat a normal size breakfast with normal contents and aim to finish it at least 2hrs before. This idea of carbo-loading the night/morning before is a myth – all you’re doing if you overdo it is stress out a digestive system that’s about to be flogged anyway. Trust in your training and don’t try anything new: pretend you have Gastro if it helps – simple foods, nothing challenging, nothing unusual (e.g. the clove of Garlic that spent the 34hrs of NB100 undergoing an Alchemical transformation from Solid to Gas didn’t win me friends or influence a single person never mind).

Thanks to Tayebeh for helping me with this one!

I love the feeling of strapping on a pair of shoes and going for a run, nothing more to think about, just you and the trails and your abilities. This is freedom, humanity, realised. That said, I think trying to take this approach with a 100km, never mind a Miler, either takes a particularly special kind of person and natural talent, a type of hallucinogenic cactus I’m yet to try, or a particularly large drop-bag of stupidity. Spend time conceptualising the course, distances, generous times, and Checkpoint flow. – Make a schedule of your nutrition needs and a checklist of things you need to do/swap/dump at each checkpoint and carry it in a Ziploc bag in your pocket. This takes the stress out of pre-race preparation, making drop bags easier to plan and sleep easier to find. During the event it takes 2seconds to check the list coming into, and during, a Checkpoint and in return gives you hours to enjoy being relaxed in the knowledge you’re far less likely to forget something. This is particularly beneficial when you’re starting to hallucinate (cactus or no cactus).

#6: Internalise others’ struggles and you leave less room for your own to take root.

This is a lesson that guiding has taught me. I used to notice that I found the same hike, paddle or climb more challenging when I was alone than with students. I realised that, while responsible for the welfare of others, I’m focused on their needs and so de-prioritise my own. I’ve successfully used this during races by checking in on others or fretting about their hardships rather than thinking about my own.

During NB100 I spent quite a while running with a close friend who started to struggle toward the end of the 2nd lap. By trying to focus more on their situation and doing my best to care for them I was able to set aside and more easily ignore, if not forget about, my own niggles and complaints. 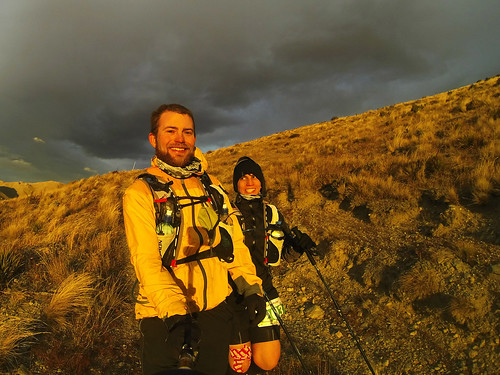 Hanging out with Tay